The Court of Appeal has upheld the High Court ruling that BBI is null and void and its processes were unconstitutional.

In a majority decision on Friday, six of the seven-judge bench, headed by the Court’s President Daniel Musinga tore into the BBI process, declaring several stages and actions unconstitutional and unlawful.

The judges, however, expunged part of the High Court orders including one that said that President Uhuru Kenyatta had contravened Chapter Six of the Constitution.

The judges unanimously set aside the declaration that Uhuru contravened chapter six of the constitution for initiating the BBI process.

All judges have agreed that the basic structure is applicable in Kenya.

However, 5 judges affirmed that the basic structure doctrine limits the power to amend the constitution. Judges Okwengu and Sichale dissented.

All the judges have also unanimously ruled that civil proceedings can be instituted against the present, Justice Tuiyott dissented.

The bench has also held that the BBI steering committee has no legal capacity to initiate changes to the constitution.

Six judges have held that the constitution of Kenya cannot be subjected to the referendum unless. Justice Sichale dissented. 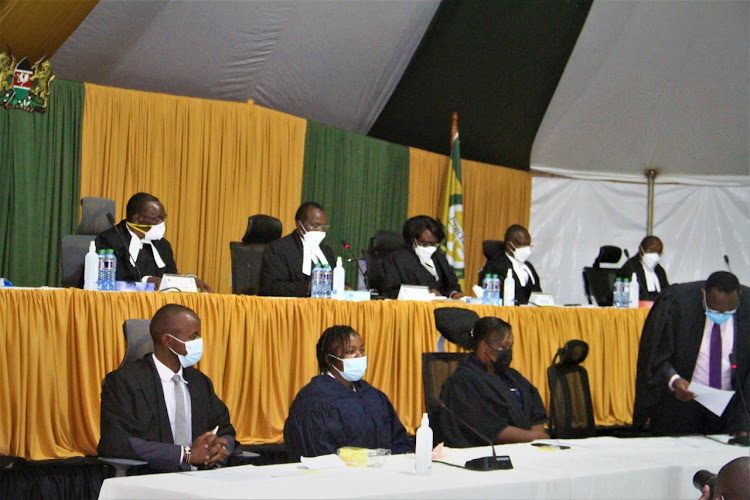 Justice Sichale also disagreed with the majority who held that IEBC did not have a quorum for carrying out verification of signatures and other administrative processes.

The judges also unanimously agreed that at the time of collection of BBI signatures there was no legislation given on verification of signatures.

“A permanent injunction is hereby issued barring IEBC from conducting a referendum on the constitutional amendment bill 2020,” the judges said.

The Judges also appeared to raise the bar on amending the Constitution through popular initiative and making it even harder to amend the country’s supreme law.

The majority faulted the President for riding on a popular initiative – an avenue reserved for the common man – to instigate constitutional changes.

William Ruto: My life is in danger

Why is no one buying modern Chinese fighter jets?

Not many countries are currently buying Chinese fighter jets because they want a sure thing when they go into combat. China has ambitions to become a major player in the military aviation market. With aircraft like the J-31 stealth fighter, China hopes to provide a lower-cost alternative to the popular US F-35 stealth fighter.

China has made incredible progress but has an uphill battle in challenging the F-35 with the J-31. The US has been designing, testing, manufacturing, and improving stealth fighters for over 40 years and has already built and flown a 6th generation fighter. China is the new kid on the block, and they are quickly overtaking Russia in aviation technology.

China lacks a significant combat and sales record for their aircraft. Although Chinese aircraft are less expensive than western fighters, their combat performance is a question mark and countries with money prefer to buy a fighter that has been mass produced, tested in multiple countries, and is combat tested. China may be the new kid on the block, but they are highly capable and on a fast pace to challenge competitors with advanced technology.

Should he win the presidency, Wajackoyah said he will introduce the death penalty for men who will be found guilty of abusing their wives.

While campaigning in Kirinyaga, the presidential hopeful said his government will hang men who slap their other halves. Apart from abusive men, the learned politician had initially said he would reintroduce capital punishment for corruption offenders through constitutional review.

During the Sunday, June 12 rally, Wajackoyah, whose campaign slogan is Tingiza Miti literally means to shake the trees, said he will also improve the lives of men in uniform. He noted that he was a policeman before and so he understands their predicament. Should he win the presidency, he promised to buy each policeman a car and house so that they do not solicit bribes from people. He also pledged to improve their salaries. The 61-year-old academician said his main aim will be to ensure people have money in their pockets and are happy.

Presidential aspirant George Luchiri Wajackoyah, 61, has kicked off his Campaigns on a ‘high’ note promising corrupt judicial officers that he will hang them.

Besides relocating the capital city from Nairobi to North Eastern region, the Roots Party aspirant said he will also suspend the constitution for six months so as to launch a conversation with Kenyans on how to entrench the death penalty in the laws of the land as well as legalise industrial marijuana.

“Judiciary is one of the biggest stumbling block in realising aspirations of a prosperous nation. I will adopt a style whereby if you suspect yourself to be corrupt, we encourage you to kill yourself or if we try you and you are convicted, you be killed,” he said.

He said the ideality of moving the capital to say, Isiolo will open up the northern frontiers as administrative capital, freeing Nairobi to be an industrial hub.

Saying “I am not all that stupid,” Wajackoyah dismissed the motion that he is a joker and a nuisance contestant, saying that “those discriminatory traits are so irking.”

He took issue with the Infotrak pollster results released on Wednesday showing his competitors– Raila Odinga and Dr William Ruto– as the only serious candidates, ignoring him and Mwaure Waihiga by according them no rating.

Wajackoyah, who was accompanied on Citizen TV by his 35 year old running mate–Justina Wangui Wamae said on July 2, they will be releasing their 12-point manifesto to drive their state house bid.

She said she does not smoke bhang “despite our ticket being widely accused of exhibiting signs of its users.”

In an interview on Wednesday night on Citizen TV, Mr Wajackoyah argued that if Kenyans are allowed to grow bhang for export, that would likely increase money circulation in the economy, claiming that a sack can be sold for $3.2 million.

“The solution is growing marijuana, which will enable this country to [pay its] outstanding debts. Have enough money, have enough money for all Kenyans. And if one sack of marijuana is $3.2 million, if you convert that into Kenyan currencies, it is a lot,” he said.

He said there should be no worries about finding a market for the marijuana.

“We are going to export it, not import it. We’re going to grow it and export it. I’m just back from the United States and Canada during my research and trust me, there are so many companies … telling me please we have the market ready here in Canada,” he said.

He said marijuana, which he claimed he has never smoked, remains the country’s gold that needs to be exploited to catalyse the nation’s economic growth.

Mr Wajackoyah also said farming snakes will help supply venom for the manufacture of medicines and for export.

“A lot of people are bitten by snakes in this country and we have to wait for snake doses from outside the country through pharmaceutical corporations,” he said, adding that one way of paying off the national debt “more so those of Chinese is by extracting snake venoms for them”.

Citing countries without written constitutions, Mr Wajackoyah took a jab at the Judiciary, saying that it is the biggest impediment in Kenya’s democratic growth.

“We have countries like Israel, New Zealand, Canada and the United Kingdom which don’t have written constitutions. They welcome conventions,” he said.